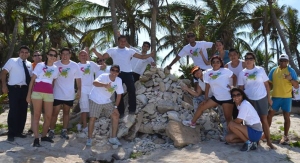 It’s that time of year: sea turtle nesting season! All summer, endangered sea turtles will be nesting on beaches all over the Gulf of Mexico, including the beach at Grand Sirenis Resort & Spa! Sirenis Premium Travelers Club and Sirenis Hotels have always been friendly with the wildlife that lives and visits our resorts, but sea turtles have a special place in our hearts (and our backyard!).

For the third year in a row, SPT staff took on the challenge of making our beaches safer nesting spots for sea turtles—primarily green sea turtles, one of the most endangered species of sea turtle in the world. During our monthly staff meeting in May, SPT staff formed teams and removed large rocks from the beach area; 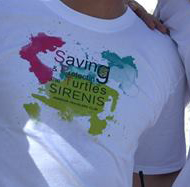 rocks that may be dangerous obstacles for sea turtles attempting to come ashore to nest, and possible obstacles for hatchlings scrambling from the beach to the sea. The team that removed the most rocks (by weight) won free spa treatments at Spa Grand Sirenis. There was also a contest for the best t-shirt design for the event.

This is the first year Sirenis Premium Travelers took to removing rocks, but not the first for dedicated beach cleanup in an effort to protect marine wildlife, including sea turtles. In 2012 and 2011, SPT staff organized a beach cleanup, removing trash and other debris that had washed ashore in front of the resort. Small pieces of plastic can be deadly to sea turtles that sometimes mistake plastic for jellyfish, one of their favorite treats.

Sirenis Premium Travelers Club will be conducting beach cleanups and other environmentally friendly activities at Sirenis Punta Cana in the Dominican Republic, as well. Stay tuned for more on that story coming soon.